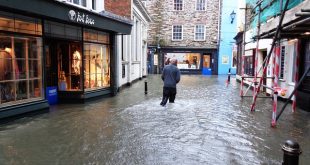 Ill-prepared for the coming shit storm

The limits of green idealism

You wait centuries for an apocalyptic horseman to arrive and then two of them appear at once.  I refer, of course, to two of humanity’s oldest foes; famine and pestilence – both of which are in the news this month.

Famine comes in the form of the unfolding calamity across America’s “bread basket” Midwest.  As Climate and Economy report, ongoing rainfall on already saturated fields looks set to prevent much corn even being planted.  This comes on top of the damage already done to food stores which have had to be destroyed after being inundated with polluted floodwater; removing a buffer that might otherwise have offset the expected poor harvest.

The macro economics of this are simple to understand once you realise that the US dollar is still (for now) the medium of exchange on most international markets.  Thus, a poor US harvest will not translate into a US famine… at least, not entirely.  The US food industry will be able to use dollars to purchase international supplies of grain to offset the domestic shortage.  This will cause prices to rise and will add to the hardship experienced by America’s growing army of food stamp recipients.  However, for many Americans, rising prices will merely cause their calorific intake to fall to something more akin to a healthy diet.

It is the wider world that will be most at risk from America’s bad harvest.  European and Asian states whose currencies can be exchanged for US dollars will also be able to buy grain at a higher price on international markets.  However, there is a danger that – as happened in 2010-11 – other grain growing states like China and Russia may limit exports in order to avoid domestic shortages.  As with the USA, this will be a problem for the poorest Europeans; such as the UK recipients of emergency food packages from foodbanks.  On the one hand, rising prices will result in more malnutrition; on the other hand, those who donate surplus food to the poor will find their capacity to donate will fall.

The bigger problem will be in those regions of the world where currencies cannot – or cannot easily – be exchanged for dollars.  Unable to compete for increasingly expensive grain, these regions are likely to experience actual shortages of basic foods like flour and bread.  Given that many of these states are politically fragile, as happened in the Middle East and North Africa in 2011, food shortage could easily be the spark that triggers another wave of revolt.

To add to our looming misery, pestilence – which thrives on malnutrition – is beginning to spread around the world.  As James Gallagher at the BBC reports:

“The world is entering “a new phase” where big outbreaks of deadly diseases like Ebola are a “new normal”, the World Health Organization has warned.

“But the Democratic Republic of Congo is dealing with the second largest outbreak ever, just three years after the world’s largest one ended.”

Ebola is not the only disease outbreak exercising the World Health Organisation:

“The world is ‘seeing a very worrying convergence of risks’ that are increasing the dangers of diseases including Ebola, cholera and yellow fever… climate change, emerging diseases, exploitation of the rainforest, large and highly mobile populations, weak governments and conflict [are] making outbreaks more likely to occur and more likely to swell in size once they [do]…

“The World Health Organization [is] tracking 160 disease events around the world and nine [are] grade three emergencies (the WHO’s highest emergency level).”

The rise of diseases that appeared to be under control 50 years ago carries an additional threat in the developed states, where the systematic abuse of antibiotics has rendered them next to useless in the face of new resistant strains of a range of common bacterial infections.  And since there is no profit to be made from developing new drugs – particularly when the recipients are primarily in the world’s poorest (and thus least able to pay) states, we may be about to return to conditions that would have been familiar to my grandparents in the first decades of the twentieth century.  Things that we have grown up to take for granted, from not having to worry about minor cuts and grazes at work to routine elective surgery are about to get a lot riskier.  And hanging over all of our heads is the threat of an unstoppable pandemic spread via the international transport system from the poorest states to the developed, interconnected and far more mobile Western states.

In part these threats are the product of climate change.  However, in large part they speak to the increasing vulnerability of the global economy to cope with the shocks that are being thrown at it.  Like our biological vulnerability to diseases from which our dwindling stock of pharmaceuticals can no longer protect us; our weakened global civilisation is increasingly threatened by events that it would have easily bounced back from half a century ago.  The very complexity that has allowed globalisation – the zoning of the planet into extractive, manufacturing, consuming and financialising regions; the just-in-time supply chains; the complex web of financial structures that allow trade to occur; etc. – makes us vulnerable to shocks that would have been easily overcome two generations back.

Consider, for example, the 1859 Carrington event – a super solar storm that ejected a massive charged ball of plasma directly at earth.  Because industrial civilisation in 1859 was largely mechanical rather than electrical, the impact went unnoticed by most of the population.  The same event today would be devastating because our global economy relies on computerisation for just about everything that we do; from keeping the lights on to buying a sandwich or a newspaper.  The massive electromagnetic pulse from the same sized solar flare would fry almost every computer circuit on the planet.

Our vulnerability is easily understood when thinking about single external events like solar flares and asteroids.  Indeed, there may even be some psychological comfort in imagining that we will go extinct as a result of some external calamity rather than as a consequence of our own actions (I guess suicide is still taboo).  But we are vulnerable to climate change in precisely the way it is unfolding; not as a single catastrophic shock, but as a series of events – like bad harvests and disease outbreaks – that our increasingly energy-depleted system can no longer bounce back from.  The result is that the series of crises – accelerated by climate change – will have to be faced by an ever more enfeebled system; until the system itself breaks down into a more primitive and less vulnerable state.

When will this happen?

Historians – if there is such a profession in future – will no doubt look back to the late 1960s – perhaps symbolised by the first human landing on the moon – as the high tide mark of the global industrial civilisation.  Everything that we have done since the oil shock of 1973 has been a desperate attempt to sustain the system.  Globalisation itself – the added complexity that now imperils us – was an attempt at sustainability.  And while, within the bounds of the system itself, globalisation and financialisation have allowed us to keep the party going for a few more decades; we have only succeeded in making ourselves far more vulnerable to crises.

Food shortages and disease outbreaks look set to feature largely in our future.  However (asteroids and space aliens aside) there will never be a single catastrophe that will mark the moment of our civilisation’s collapse.  Rather, as appears to be occurring across the cities of the western states, more and more people will simply experience their own personal descent into a new dark age even as an increasingly detached elite and its retinue of hangers-on continues to reside within a shrinking bubble of prosperity; until, finally, even this charade can no longer be maintained.

Another crisis you haven’t heard of…

We don’t like to talk about it; but “peak death” is looming in the UK. …